Home > In the media

Dairy farmer and arable farmer Arthur van Roekel overlooks 40 hectares of grassland that is currently ideal for mowing quickly. However, he has to leave that grass at Deelen air base. In fact: he is not allowed to do anything in his meadow all year round.

That's right. Van Roekel and four colleagues lease land from Deelen airbase. The German occupier constructed the airport in World War II and disguised it as a farm. It has been bombed several times in that time.
Recently, the Ministry of Defense considered a 'drop zone'’ on the airport, because the armed forces want to practice more. It was then decided to first search for old aircraft bombs, including by its own explosive ordnance disposal service.

Bombs were found. The armed forces can continue to practice on the asphalt parts of the terrain. But the bombs found mainly have consequences for the farmers who lease land on the site. They were told last week that they are in 2022 no longer allowed on their land.

According to Defense, the greatest danger comes from old bombs with special chemical delay detonators. These are sensitive to vibrations and present a greater risk, e.g. when plowing. Explosives found less than a meter below the mowing ground. They could even detonate spontaneously.

The five farmers together use several hundred hectares at the airport. More than half of their acreage of some farmers is located at the airport, for others it concerns a third of the acreage. They call the measure bizarre. ‘There is already 75 farmed for years and nothing has ever happened, says Van Roekel, that the risk of explosions seems very small. ‘Certainly on grassland where there is no plowing.’

The consequences of the ban on land use are significant for the five entrepreneurs. In addition to loss of income due to a lower harvest, there are also many practical problems. Arable farmer Freek Brunting has ordered and paid for seed potatoes and beet seed. 'It lies aimlessly in the shed. There is no question from other arable farmers. And I have delivery obligations from Avebe and Suikerunie that I am now unable to meet.’

Van Roekel is sitting up with the manure from his dairy branch. “I have to remove it because I am not allowed to use it on my own land.’ How to proceed, the farmers don't know yet. 10 In May there will be a meeting with the Central Government Real Estate Agency and the Ministry of Defense. Then they know more. 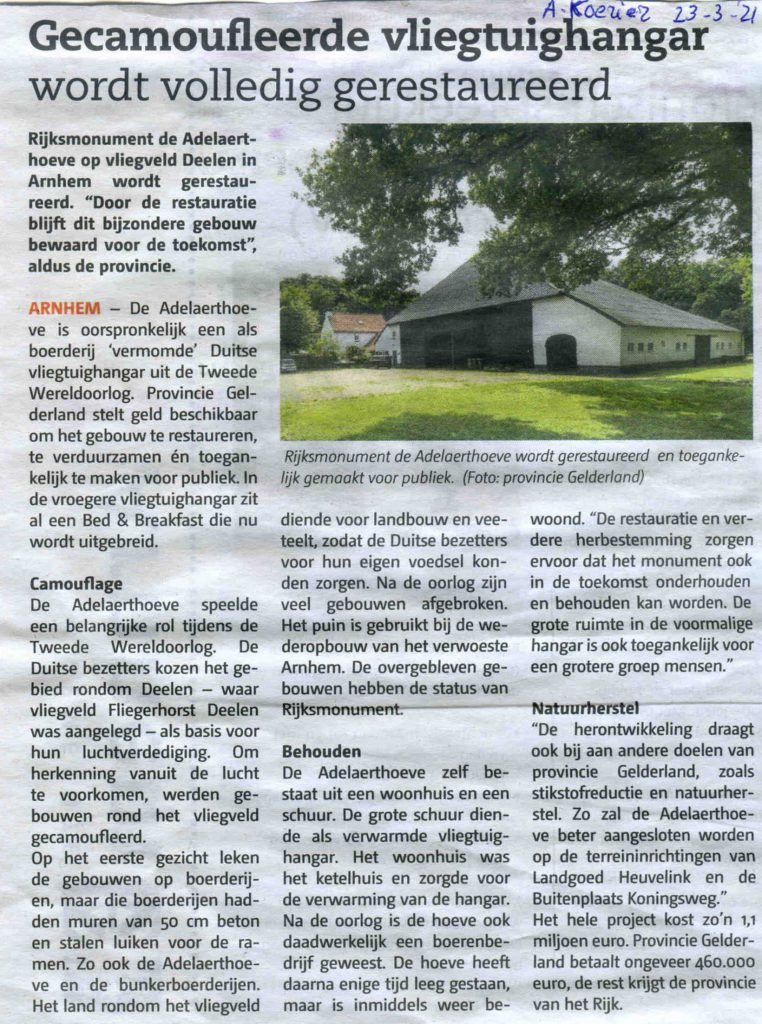 Diogenes bunker and Fliegerhorst Deelen and plans for promoting Battlefield Tourism in Gelderland.